A friend recently nominated me for a challenge on Facebook to place an album cover of an album that influences my musical taste five days in a row, without giving an explanation. Unfortunately for her, I have to acknowledge that I don’t participate in social media challenges for several reasons. In order not to disappoint her completely, I decided to do something with it. The challenge got me thinking; what are in my opinion the five most beautiful album covers of albums that I have in my collection? And can I go deeper into that than just share images of it? This sounds like a new challenge.

The tricky thing about aesthetics is that it’s almost entirely subjective. Therefore, everyone also has a different idea of what he or she likes. That makes it difficult to show someone else the reasons why you love the thing you show. This doesn’t only apply to album covers, but for everything that has to do with image and sound, including paintings, films and music. The challenge got me thinking and I wondered what my favourite album covers are, and also why. With this I ignore the challenge, where the aim is to only share the album cover without any explanation. The disadvantage is that, without explanation or something, it’s only fun for people who know the album or artist, while it adds nothing to people who don’t know it. In this article I want to put less emphasis on the music that an artist produces and mainly look at the album cover, no matter how much I like the album myself. At the same time, these are albums by artists that I listen to myself, so each album contains at least one song that I really like.

According to the challenge, you are supposed to share five album covers. My first selection resulted in twelve album covers, and it was extremely difficult to select only five in the end, because every album cover is beautiful in its own way. At the time of writing, I don’t know how many album covers I’ll choose. In order not to make the post too long, I’ve decided to only discuss the first three album covers I’ve chosen. I may discuss five, but perhaps more. As you’ve already read I ignore most of the rules of this challenge, so why not ignore this rule too?

To still add a musical part, I also put my favourite song from the album under each album. While I was writing about the three albums, I put on the album I wrote about. Maybe it has contributed to my creativity. 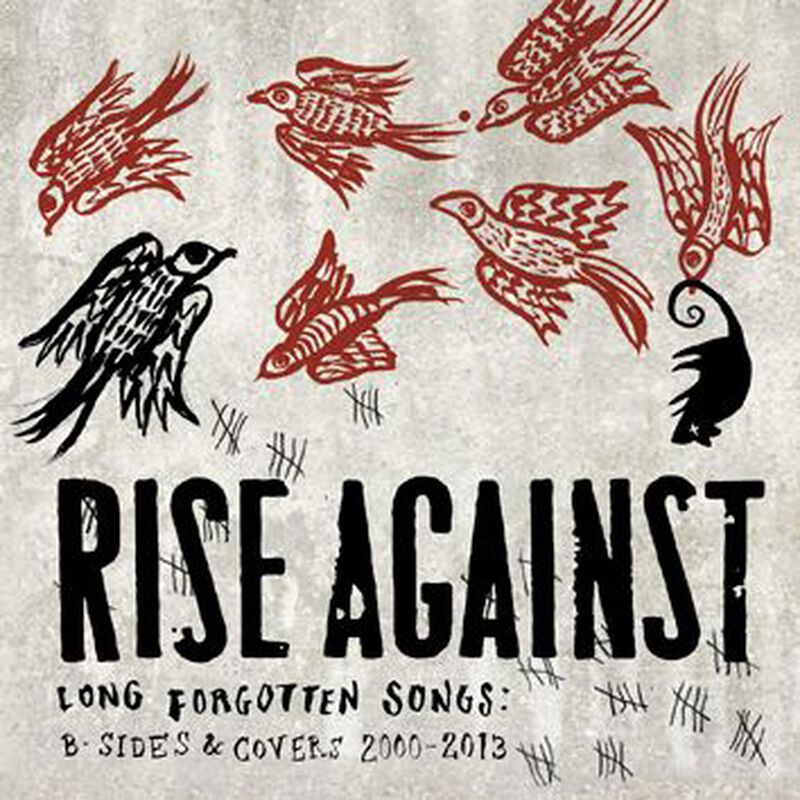 This Rise Against album isn’t even part of their official album discography. It was released in 2013 and contains, as the album’s subtitle already reveals, only b-sides and covers; 26 in total to be exact. The album name is a play on their song Long Forgotten Sons, which was released on their album Appeal to Reason in 2008. Long Forgotten Songs is a reference to the lesser known songs of them that they hadn’t previously released on an album or added as a bonus track.

There are several aspects of this album cover that I like. First of all, the illustrations. I really like the style in which the birds are drawn. Somewhat roughly drawn, but clear that they are birds. The same goes for the other illustrations; the band name, the album title, the mouse/rat in the mouth of the rightmost bird and the different tallies. The tallies are an interesting part and remind me of a prisoner almost forgotten counting down the days before he is released. This could be a reference to the songs, which have waited a long time before finally being shown to the outside world.

What is striking about the birds is that one bird has a different colour, and that that bird flies in the opposite direction of the red birds at the same time. The against the grain punk ideals from Rise Against may be made visible in this. In addition, there are six red birds, and when this album came out the band had released six studio albums. Coincidence?

My favourite song from this album: Lanterns. (Text continues below video.) 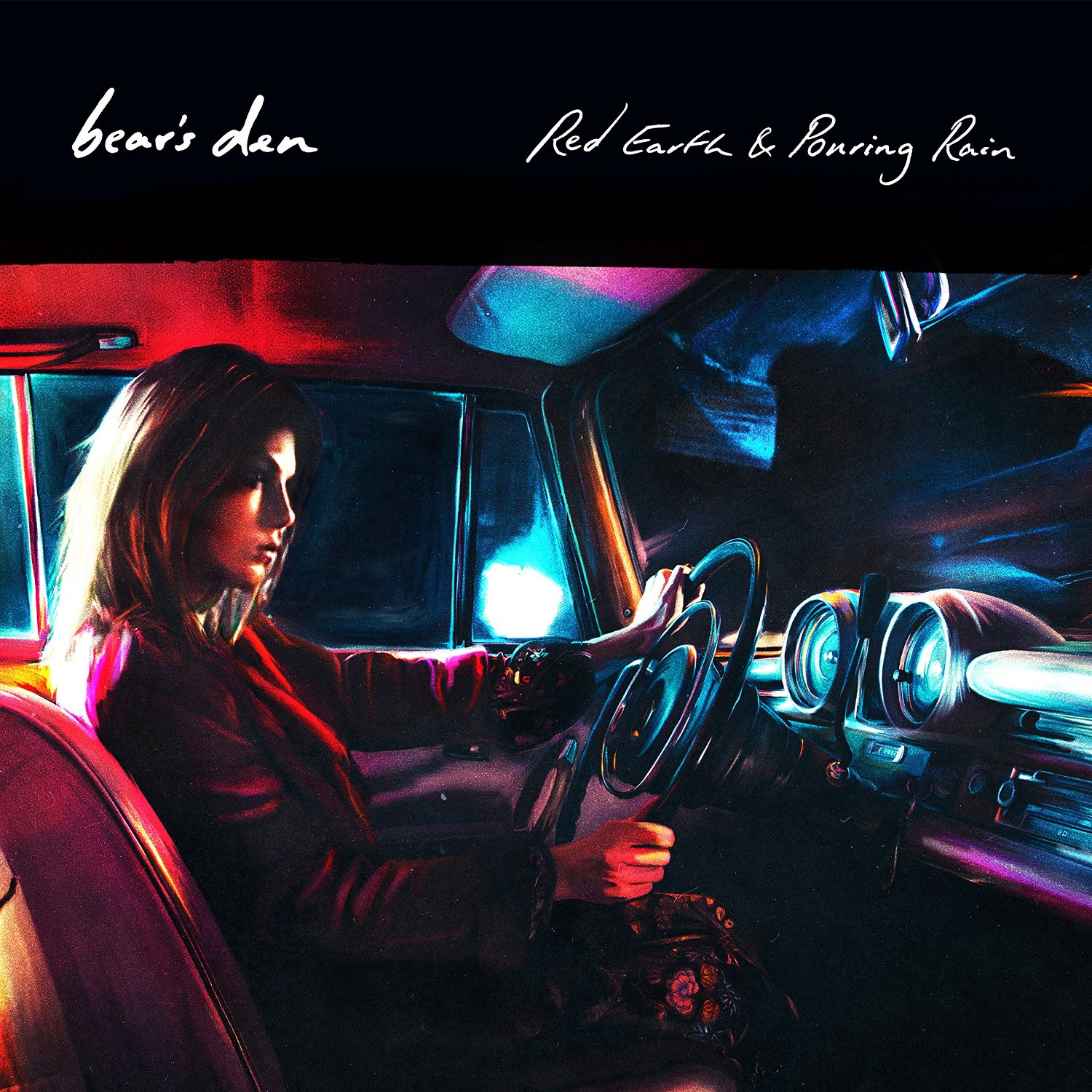 When I look at the album cover of Red Earth & Pouring Rain from Bear’s Den, I immediately get a certain feeling. A nice feeling. A woman driving around in her classic car in the evenings. I really like the style of the illustration, especially because it is detailed and colourful, but at the same time also brings a certain atmosphere through the dark. Contrast also plays a role in this. On the left the more restless but warmer red shades and on the right the colder blue shades. Would this split be a reference to the title, with Red Earth (red) on the left and Pouring Rain (blue) on the right?

That is also what the band is trying to achieve with this album. On the one hand writing songs that create a nostalgic atmosphere, but on the other hand also producing an album that can be played during night tours. The album cover already puts me in the right mood for that.

My favourite song from this album: Emeralds. (Text continues below video.) 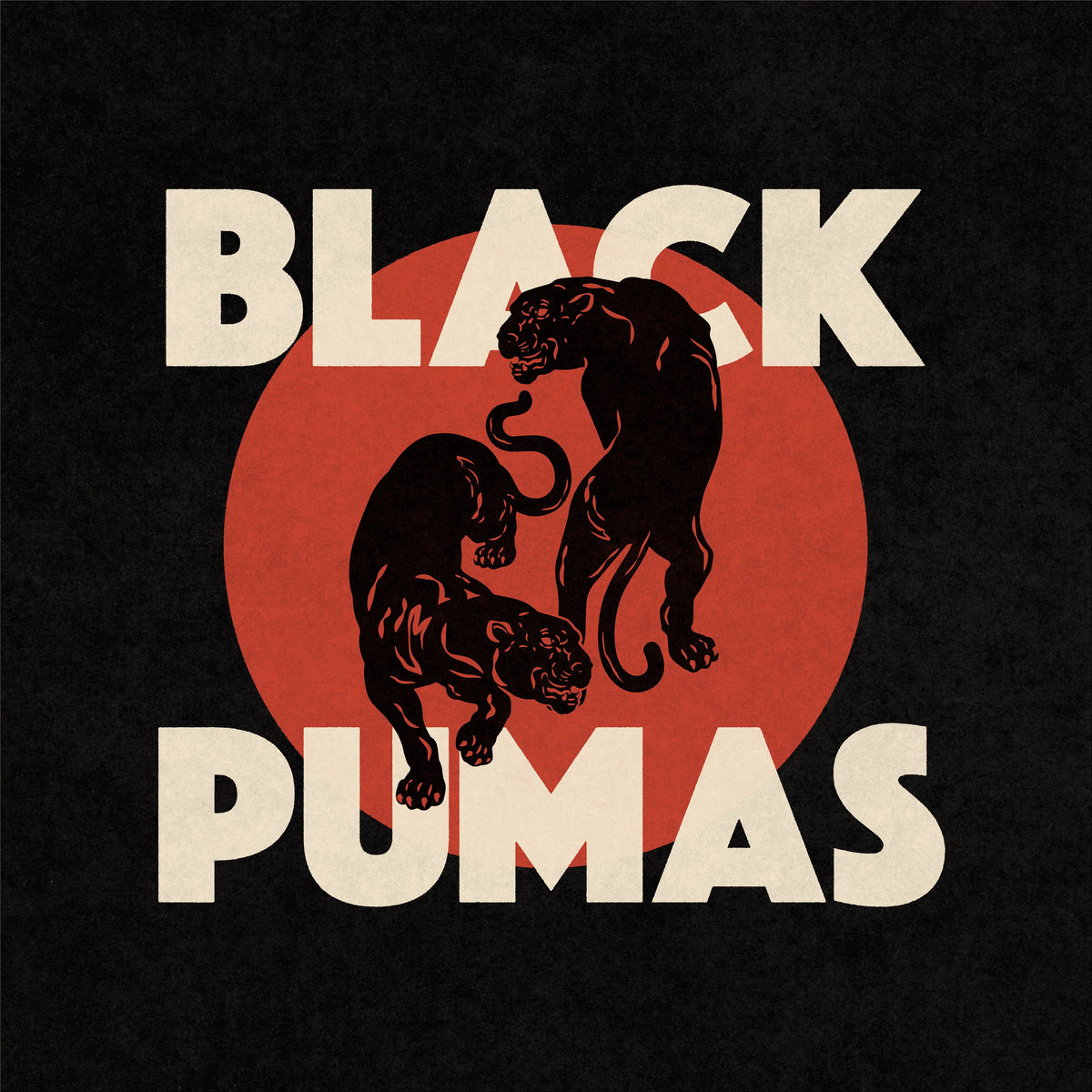 The Black Pumas is a promising newcomer to soul music. With their self-titled debut album, released in 2019, they were immediately nominated for the Grammy for the best new artist. The band makes soul music with a style that originates from the 60s and 70s and has chosen a matching album cover for their debut album. It is a fairly simple album cover, but for me that is also the power of it. The emphasis is not in the details, but on the whole; a black background with a red circle on top, in beige the band and album name and on top two black pumas that walk around each other while making eye contact. And that while black pumas don’t even exist.

The simplicity of the album cover in combination with the colours and the style of the illustrations make this in my opinion a beautiful album cover. It has a great vintage look, which suits the music they make.

My favourite song from this album: Colors. (Text continues below video.)

So far the first part of this #coverart challenge. I found it quite difficult to tell why I find these three album covers beautiful, but I hope it came across somewhat. Let’s see what I make of it in part two.

Next post: The Playlist that turned into a Musical Diary